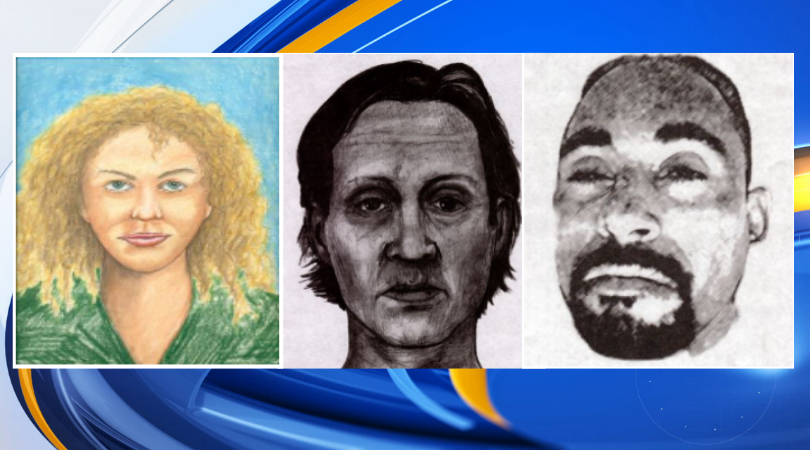 6 bodies found since 1970, yet to be identified in northwest Florida

NORTHWEST FLORIDA (WKRG) – Over the past five decades, agents from several different agencies in the Northwest Florida area have found multiple bodies they have been unable to identify .

| FUGITIVES | Help US Marshals catch fugitives in our area

On June 15, 1970, the remains of a white male were found west of Bronson Field Gate near Pensacola, Florida. The man was between 45 and 60 years old. The man had brown hair with a bald spot in the front, was 6ft 1in tall and weighed between 180 and 200 lbs. When found, the man was wearing a blue shirt, plaid swimsuit and red socks. Today, the man would be almost 105 years old.

On December 18, 2004, the remains of a black man were found in an empty mobile home on Pine Forest Road and Mandaville Lane in Pensacola, Florida. The man was between 40 and 50 years old. He was between 5ft 4in and 5ft 10in tall. The man had a gap between his teeth as well as four fillings. When found he was wearing a “Butler” cap, Levi’s jeans, white socks, a black belt, an undershirt and black and red athletic shoes. The man would be about 63 years old today.

On May 17, 2006, the charred remains of a black woman were found at 1507 North Kirk Street in Pensacola, Florida. The woman was 5ft 1in tall and weighed 150lbs. Police say her name may have been Justina Phillips. His age is currently unknown.

On August 5, 2007, a Hispanic man was struck and killed by a vehicle on State Route 189 at Manning Drive in Fort Walton Beach, Florida. The man was described as being in his mid-20s or 30s, 5ft 7in tall and weighing 146lbs. He is said to have had black hair, brown eyes, and a neatly trimmed mustache and goatee. The man was found dressed in a white polo shirt with blue stripes, khaki cargo shorts, a khaki belt, gray boxer shorts, two black and white tennis shoes, a white cap and a yellow metal chain. He would now be about 45 years old.

On September 14, 1994, the skeletal remains of a white female were found in a wooded area west of Interstate 10 in Holt, Florida. The woman was between 30 and 40 years old. She was 5 feet 4 inches tall and weighed between 110 and 120 pounds. The woman wore a green and red floral print dress and a short floral patterned jacket. She had a black cord bracelet with multicolored beads and wore a silver ring on her right hand. On her left hand, the woman wore a heart-shaped silver ring, a charm bracelet without charms, a silver ring and an orange ring. Agents said her name might be Suzanne.

On March 12, 1986, the body of a white woman was found in a creek off the Yellow River near Milton, Florida. The woman was described as 5ft 5in, 120lbs, with brown hair and aged between 21 and 35. Officials say she appeared to be a heavy smoker and was most likely missing several teeth.

If you have information on any of these cases, please contact your local police department.