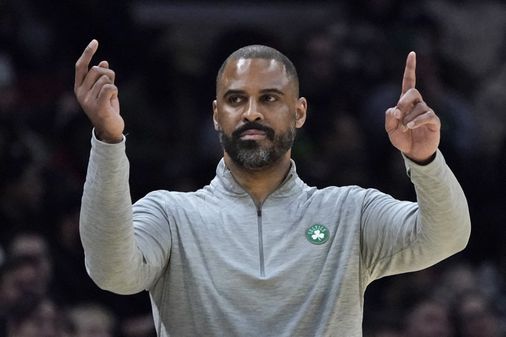 Celtics coach Ime Udoka made his NBA debut as a player with the Lakers in the 2003-04 season. But he only had a 10-day contract and none of his four games as a pro were against the Celtics.

So Boston’s game against the Lakers on Friday provided Udoka with his first real taste of the rivalry. He said Celtics president of basketball operations Brad Stevens, who coached the team for eight seasons before assuming his new role, briefed him on what to expect.

“Fasten your seat belt,” Udoka remembers telling him Stevens. “The city calls for this game all the time. It’s a historical story from years gone by, and he just said enjoying it for the first time you go through it. You and the players are ready for that, too.

Udoka said he and his assistant coaches talked about being in the game for the first time, but as a former NBA player and longtime assistant Udoka had kept track of it for some time.

“You see it from afar growing up for years, and to be a part of it now, you can also feel the buzz around the city and our organization with the players,” Udoka said. “We all know what it means and for me the first time I walk through it it will be different when we come out. But there are plenty of firsts this year that you can experience on the fly. My thing is not to be too high on the game or a rivalry. It’s more about trying to get wins.

Celtics forward Jaylen Brown missed his seventh straight game on Friday with hamstring strain, and center Robert Williams was out for the second game in a row with knee pain. The two players had been listed as questionable Thursday night.

“[Jaylen] is near, ”Udoka said. “He can’t wait to play. We’re going to hold him back a bit, me and the medical staff. He really wanted to play tonight, let alone his home in Atlanta, but we think he needs a little more time. He increased it over the last week. He’s not quite ready, but he’ll be back soon.

Williams was a decision to be made during the game, so there’s a chance he could play against the Thunder on Saturday night.

The Terrence Clarke Memorial Gym will be unveiled Sunday at the Vine Street Community Center, a joint initiative of the Celtics, NBA and New Balance.

Clarke, a Boston native and basketball star from Kentucky, was killed in a car crash last April as he left a pre-draft practice session in Los Angeles. Clarke grew up playing basketball at Boston Centers for Youth & Families Vine Street. He then befriended Brown and was a frequent guest of him at Celtics games during his senior year at Brewster Academy.

The upgraded gym will feature Clarke’s “TC5” logo in the middle of the court, along with upgraded basketball hoops and wall pads, and newly installed volleyball equipment. A quote from Clarke: “I want to be that guy for everyone in town” will be displayed along the sideline, and a memorial for Clarke has been built near the entrance to the facility.

Thank you for your donations !! Update on the shortage of WOLF STREET mugs (I went out). And reminder, if you missed it: please donate