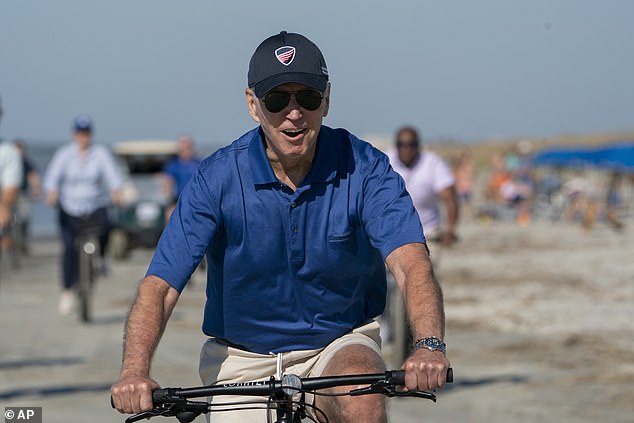 President Joe Biden and First Lady Jill ventured out for a bike ride Sunday morning while vacationing on Kiawah Island, South Carolina, on the one-year anniversary of the Taliban takeover of Afghanistan.

When reporters asked if Biden would speak to the press, he said “no,” but insisted he had been “on the phone a lot” during his family vacation.

The president wore a blue shirt and khaki shorts and a Beau Biden Foundation hat for the Sunday morning outing while Jill wore a white tank top, black sports skirt and purple tennis shoes. The two donned a pair of fliers.

Biden took selfies with beachgoers and told reporters he was enjoying his White House vacation “a lot” but would not comment on any news from the day.

Meanwhile, former Afghan President Ashraf Ghani spoke with Fareed Zakaria on his Sunday GPS show on CNN a year after the country fell under Taliban rule.

President Joe Biden was spotted on a bike ride in Kiawah Island, South Carolina on Sunday August 14 during his family beach vacation 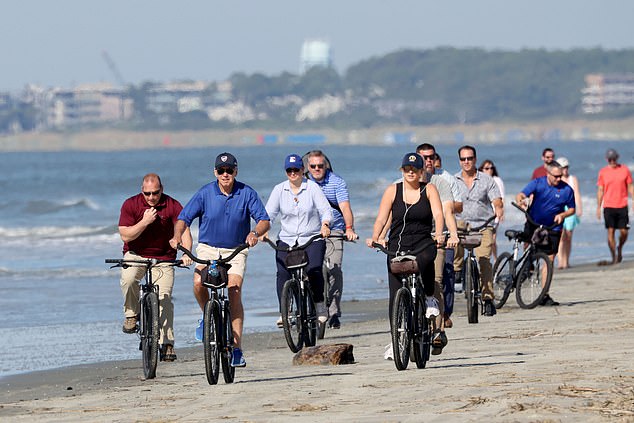 The ride came on the eve of the one-year anniversary of the Taliban’s full takeover of Afghanistan following the Biden-ordered U.S. troop withdrawal. 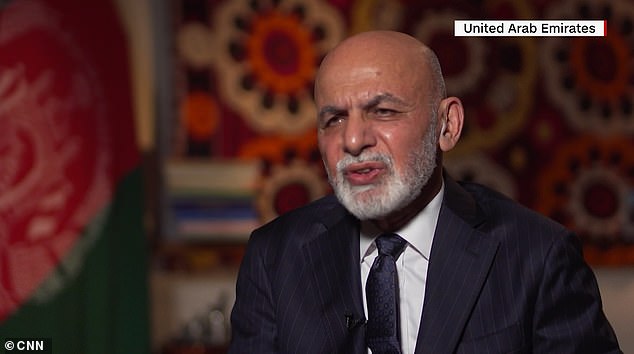 Former Afghan President Ashraf Ghani said in a CNN interview that aired on Sunday that the announcement of Biden’s withdrawal helped lead the international community to drop support for his government.

He also defended his decision to flee Afghanistan, saying taking a stand was not an option like it was for Ukrainian President Volodymyr Zelensky, who Ghani said was better able to fight back due to support. internationally to the sovereignty of his government.

“The whole of NATO, the United States, Australia and other countries have rallied behind Ukraine,” Ghani told Zakaria in an interview broadcast Sunday morning.

“It was a time in 2021 where the support for staying in Afghanistan after President Biden’s decision was gone,” he said. “It was an irreversible decision, and people were basically asking, if you’re going to fight another round of civil war, what’s the end? What is the conclusion? 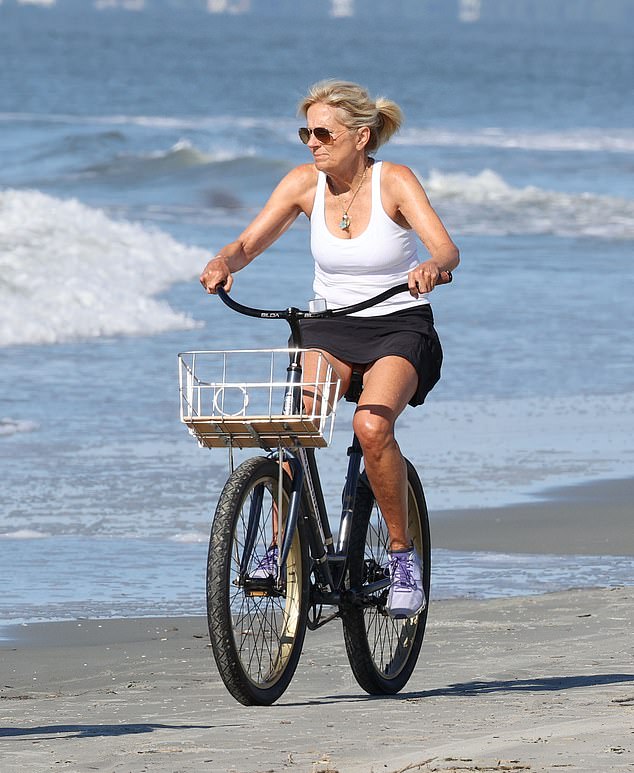 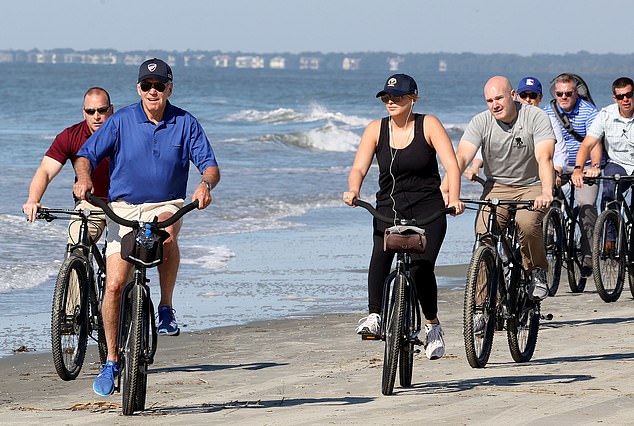 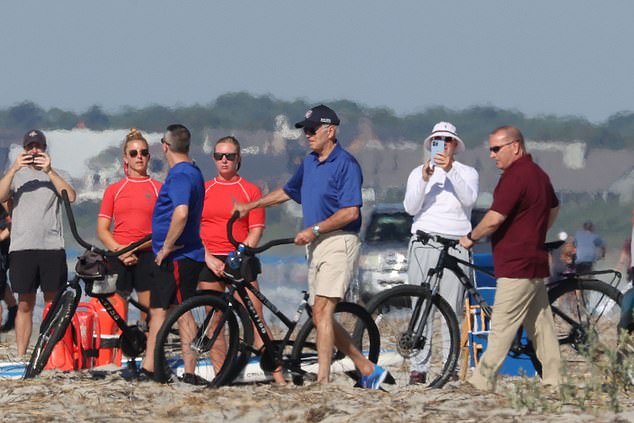 Biden stopped to take selfies and speak with passers-by on the beach in South Carolina on Sunday August 14, 2022 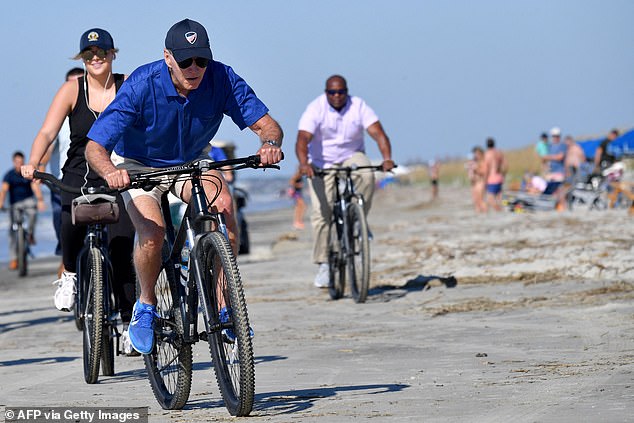 Biden did not speak to the press about the day’s news, however, simply telling reporters he was enjoying his family vacation and making several calls.

Ghani declined to say whether he felt “betrayed” by America.

“I don’t use those kinds of words,” he said. “Because our trauma, our pain should not go in the direction of betrayal or blame. We need to focus on what is now in front of us. We need to learn from the past and face the present.

“Our country is in a terrible state,” Ghani insisted. “I don’t have the luxury of indulging in blame or a sense of betrayal. The superpowers, the great powers decide on the basis of their national interest. What I hope is that they have considered the implications of these.

That day, the United States completely evacuated diplomats from the embassy by helicopter.

The Taliban entered Kabul on August 15, 2021 and took control of the capital, leading President Ghani to evacuate. Pictured: Taliban fighters sit on an Afghan National Army (ANA) humvee on the day Kabul fell to their forces

In late August 2021, a US military C-17 ferried the last US troops out of Afghanistan, marking the official end of the longest war in US history.

The withdrawal, however, was fraught with pitfalls, including leaving between 100 and 200 Americans and tens of thousands of Afghan allies in Afghanistan.

Thirteen US service members also lost their lives during the pullout in a suspected IS suicide bombing at Kabul airport. 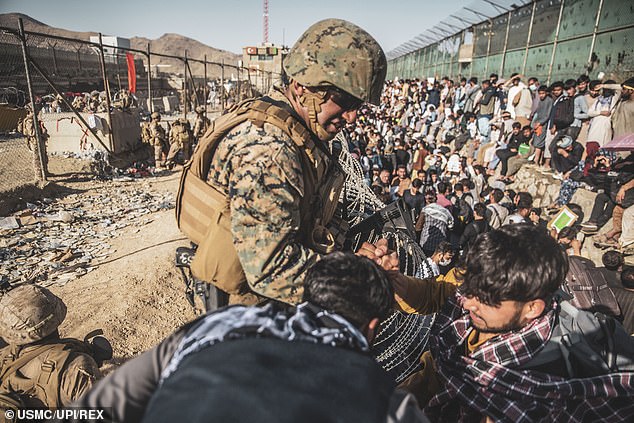 The withdrawal from Afghanistan last summer was fraught with difficulties, including the death of 13 American servicemen in a suspected IS bombing at Kabul airport, as well as the total withdrawal of troops between 100 and 200 Americans in Afghanistan.