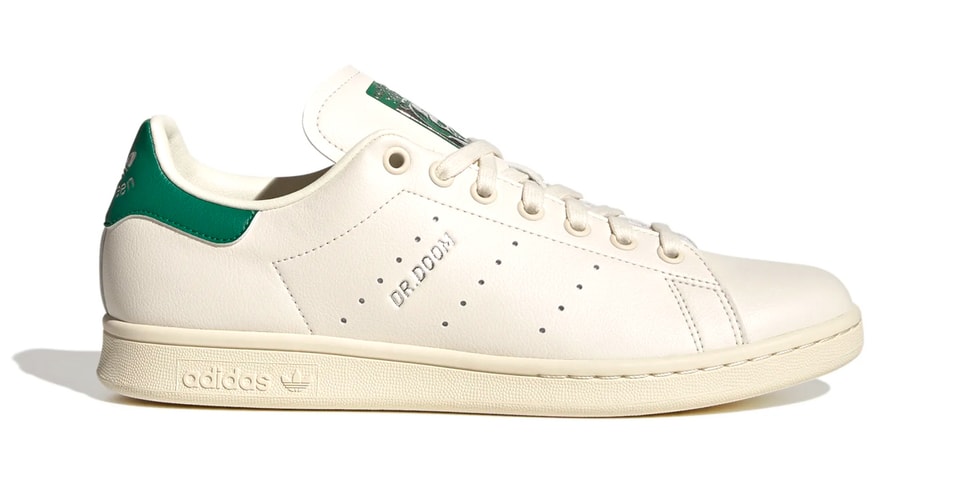 When considering adidas‘ most notable collaborators, Kanye West tends to be one of the first names that come to mind. However, mass media and entertainment company Disney eclipses most of its peers when it comes to awareness. While key franchises such as Star Wars and Marvel have been used onsilhouettes each year, oscillating between subtle references and all-out thematic looks. Now, continuing their partnership, Disney’s Marvel Universe has connected with the Three Stripes once again, this time bringing Doctor Doom to the Stan Smith.

Although Doctor Doom hasn’t officially joined the Marvel Cinematic Universe, he does land on the adidas Stan Smith in a colorway similar to the shoe’s original white and green colourway. An off-white leather upper features silver “DR. DOOM” text at the midfoot while a matching silver portrait of Doom hits the left shoe tongue. The sneaker also fits into adidas’ Primegreen category with the upper containing at least 50% recycled content, referenced on the heel with the text “it’s not easy being green”.

adidas has yet to share an official release date for Disney x Marvel x adidas Stan Smith’s “Doctor Doom.” Look for it in the next few months via the three bands and select retailers at an expected price of $130 USD.

Elsewhere in the footwear world, another slip-on shoe option comes from adidas with the adidas Originals Puffylette, reminiscent of padded jackets.

The best sneaker releases from August 2022