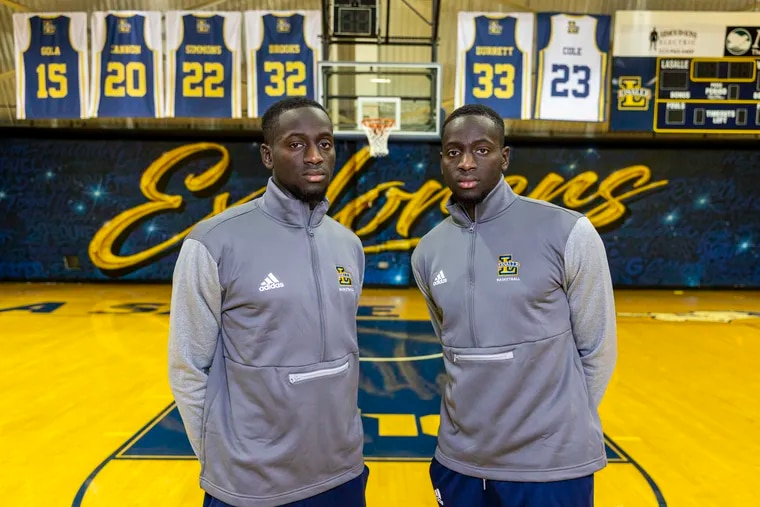 When the two are dressed head to toe in La Salle basketball gear, the Drame brothers, Hassan and Fousseyni, are indistinguishable.

Beyond looks, the basketball duo from Bamako, Mali, both stand 6ft 7in tall, are marketing majors, aspire to be professional players, and they’re both the same age – not a minute or two older or younger as far as they are concerned. And yes, they are twins.

This is where the similarities only continue, as the brothers have played the game together for as long as they can remember.

Throughout their careers, they’ve made Mali and Drame name history together – most notable here in the United States during the heroic run from St. Pierre University in the 2022 NCAA Tournament.

This profile is part of The Inquirer’s City 6 men’s and women’s college basketball preview series. Here’s the full schedule. Want to know more about your favorite City 6 program? Visit inquirer.com/collegesports

“There is a saying that you never change a winning team. Together we were winning,” Fousseyni said. “And the only question for us is why would we change it? which is broken. So it’s not broken, why would we want to fix it… We’ve been winning since day one.

This year, as senior transfers, they plan to replicate the race on West Olney Ave.

La Salle opens his season Nov. 7 in a Big Five matchup against Villanova. It will be a real test for the Explorers, but especially for the Drama duo who have Atlantic 10 Championship aspirations and an NCAA Tournament bid in sight.

“I believe that every great leader [in a coach like Fran Dunphy] has a large suite. If we become a big follower, we will become a big team,” Fousseyni said. “We are ready for the challenge. We’ve done it our whole life. »

When the twins were 13, the Mali women’s under-18 basketball team won the African championship. It was then that their father immediately pushed them towards basketball after witnessing the opportunities the sport can bring. Two of these opportunities? Nike Air Jordan shoes and, of course, playing college basketball in the United States.

“As we moved forward, we started to fall in love with the game,” Fousseyni said. “We always like competition, no matter what it is.”

As new opportunities presented themselves in Mali, the brothers became more serious about their game. However, it wasn’t always easy. Hassan and Fousseyni were repeatedly called up to try out for their country’s national under-17 team but continued to be cut out.

“The coach at the time didn’t really like us. He did it in order to humiliate us. To call us out and show people that we are no good,” Fousseyni said. “We took it very personally. We have decided not to play for the [Malian] National team.”

Changing paths in 2016, the brothers started school at Our Savior New American School in Long Island, NY They left their parents and six siblings behind knowing only “yes”, “no” and “OK ” in English. Their English has improved greatly thanks to their foster family and their game, learning to understand basketball through the film rather than just moving on to the next opponent.

In 2019, as their classmates prepared to graduate, the Drames returned to Mali to compete. This time it was at the 2019 FIBA ​​Under-19 Basketball World Cup – where no Mali team had been before.

“People thought Mali was only going there to hang out,” Hassan said. “Many World Cup players are professional or semi-professional, or should be top players in America. The Malian mentality is not just about the name on the shirt. It’s the heart. I’m pretty sure that people who know us know that the heart is above everything.

Mali then beat Latvia, Canada, New Zealand, Puerto Rico and France to meet the United States in the league game, where they lost 93-79. Mali were the first team from Africa to play a game for the gold medal at the FIBA ​​Under-19 World Cup.

Hasan added:[Do that] and the world starts asking, ‘Who are these players?’ ”

Saint-Pierre was one of several schools that knocked on Drama’s door after Mali’s top performance. Who knew the twins could turn the tiny Jersey City, NJ campus into a standout basketball school and have a Mali-like run on college basketball’s biggest stage after the Peacocks’ Cinderella run to the NCAA Elite? Eight last year?

“Our Cinderella story did not begin in Saint-Pierre. We bring that at Saint-Pierre, says Fousseyni.

The Drame brothers dreamed of going to a school no one had ever heard of. The duo walked into the high school-looking St. Peter’s gymnasium, telling coaches and players they were there to put college on the map.

They were greeted with wide eyes from a program that hadn’t had a winning season since 2011.

“From that first year, we took St. Peter’s from a losing team to a winning team,” Hassan said.

Over time, everything started to come together. St. Peter’s went 14-6 in the Metro Atlantic Athletic Conference last season, winning the championship game against Monmouth for its berth in the NCAA Tournament.

The team upset Kentucky in the first round, followed by Murray State and Purdue. For the Drame brothers, it was more than just a Cinderella ride.

“We are just going to win. Losing is not an option for us because we have more – especially when it comes to him and me – we have more to lose in life, if we lose,” Fousseyni said. “It’s our belief because we think our dream is a family dream. It is a community dream.

Now, the twins have adopted the same La Salle mindset to wrap up their college careers. Rather than exploring a program with bigger pockets, the twins sought out a program where work needs to be done and where they can leave more of a legacy.

The pair’s ambitions and belief in those ambitions are just as big as they are, if not bigger, as they begin to step onto the floor of the Tom Gola Arena towards the start of their senior season. The only difference is that one is wearing a pair of gray Crocs and the other is tan.